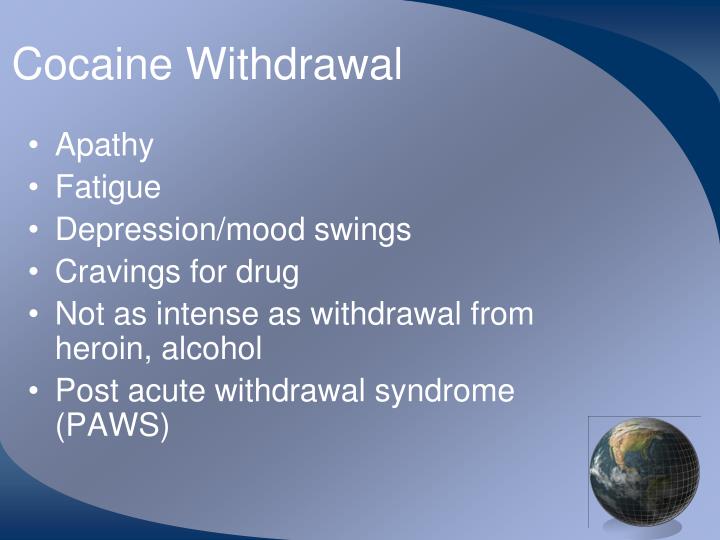 their lives.  Victims of cocaine addiction will often sell their property; steal from family, friends or businesses; divert money needed for food, housing or utilities to the purchase of cocaine; or even engage in very risky behaviors such as prostitution in order to get the money needed to purchase cocaine.  The reason for this is that cocaine withdrawal can be very difficult.  The person withdrawing from cocaine will likely experience depression, sleepiness, irritability, anxiety, chills, exhaustion and even paranoia.  Body aches; tremors; the inability to feel pleasure or to concentrate and a strong craving for cocaine are also common symptoms of cocaine withdrawal.  These symptoms begin to appear within hours of the cessation of cocaine use, but usually last only a week or two.  Over the space of about ten weeks, the person will begin to fell normal again.  Despite this short duration, they can be very hard to manage.  There is no real danger of death from cocaine withdrawal, but you might feel like you’re dying.

There are no drugs which can really remove the effects of cocaine withdrawal.  In fact, the use of pain killers or other medications intended to alleviate the pain of withdrawal is discouraged since the use of such medications may result in the person simply using the new drug in an addictive manner.  This is often described as ‘switching’ addictions.

The other major challenge of cocaine withdrawal is the presence of other problems which the person self-treated with cocaine.  These are known as ‘co-occurring’ disorders.  The person who begins to abuse cocaine often does so because it helps them manage another problem.  For example, a person who suffers from depression may begin to use cocaine because it helps them feel happier.  Once the person withdraws from cocaine, these earlier problems will reappear, and may even seem worse than they were in the beginning.  In other words, the initial cause of cocaine use will reappear and the victim of cocaine addiction may want to return to the escape they initially found in cocaine.

The victim of cocaine abuse thus faces two primary challenges when they choose to withdraw.  The effects of withdrawing from the drug itself and the reappearance of co-occurring disorders previously masked by cocaine.  Withdrawal from cocaine is, therefore, a difficult challenge.  In the face of these challenges, support is very important.  Whether it be self-help groups or professional help, the person withdrawing from cocaine will greatly benefit from the support of others.

If you want to know more about cocaine withdrawal, please go to:  http://drugabuse.com/library/cocaine-withdrawal